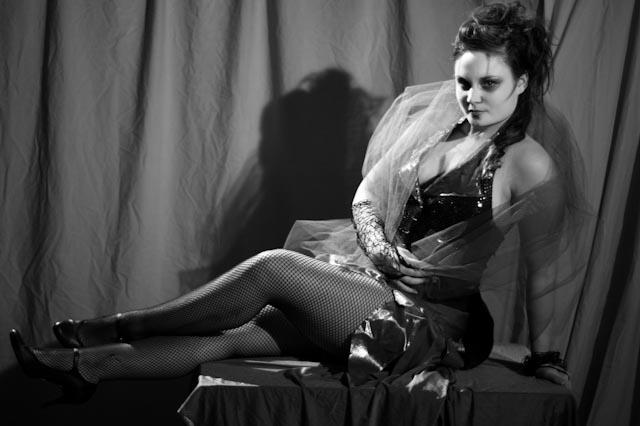 I couldn’t sleep because I had no idea what would happen the very next day.

Ever felt that kind of anxiety?

You see, back when I was 21, I decided to uproot my life and spend at least a year travelling. I didn’t really know exactly what I wanted to do… but I figured I would find out along the way…

All I knew was that I wanted an adventure.

I wanted to ‘find me’… I know how cliche that sounds… but it’s the best way I can describe it!!

I bought a round the world ticket and I was off… first stop Los Angeles.

Hang on, let me backtrack a moment… at that point in my life I wanted to be an Actress. So I figured let’s start in LA… see what happens.

I did a few bits and pieces of (very bad) acting over there in the beginning. The pic here is of me in my debut LA film as the lead in a Zombie movie (definitely a Z grade film).

Turns out, the whole ‘on screen’ gig wasn’t my thing. I found it boring and slow. The excitement for me had always been performing live on stage.

So I was lying awake at 2am after a day of filming this ridiculous Zombie movie doubting every decision I had made.

‘Who do you think you are to move to the other side of the world and think you can just make this happen?’

‘Really, an actress? What were you thinking!’

‘What are you going to do now? huh? No job, no prospects, no money…’

‘Why did you think travelling in the midst of the Global Financial Crisis would be a good idea?’ (this was back in 2009 by the way)

Have you ever questioned why you do what you do? Ever felt like you’re falling into a deep dark hole and can’t do anything to get yourself out?

The next day, knowing something had to change, I had to ‘pivot’… hehehe… sound familiar?

I began doing some ‘research’.

I typed into google; What is the best job in the world?

There were many things that came up that day… but the one that really caught my attention was; Tour Guide.

Get paid to travel ✅

Have fun with cool people ✅

Use my ‘acting’ skills ✅

That day, I had applied for a tour guiding job and even miraculously received a call to arrange an interview. Yep, it happened that fast (it’s amazing what happens when you make the DECISION to do something)…

I was a tour guide for over 5 years after that. I freakin loved it!

I had found something I absolutely LOVED and it was all because I got on that plane and began the journey.

There was no waiting around to get a job BEFORE I went… I just went. I made the decision and backed myself. Yes there were moments of doubt along the way… and that’s ok.

I’ve done MANY other things since then; worked as an emergency management officer in the mining industry, owned a number of businesses (still do) and even competed in the Kung Fu World Championships in China a few years back…

Here’s the thing… once you realise that GOING FOR IT will take you further than waiting on the sidelines… then there is nothing stopping you. Even if it’s not where you originally thought you’d end up.

How do you find the courage to go for what you want?

You simply take the next step.

That said, the next step from here is to pop a ♥️ in the comments
below if you would like access to my FREE training which will show you how
to find BALANCE in your business and life FAST!